The Annabel Neasham-trained Zaaki remains the short-priced favourite ahead of Saturday’s $5 million Ladbrokes Cox Plate (2040m) at The Valley.

The dual Group 1 winner came up trumps in gate 6 as he looks to bounce-back from a shock last-start defeat in the Neds Might and Power Stakes two weeks ago at Caulfield.

The star stayer got into as short as $2.60 in Ladbrokes’ All-In Cox Plate market when he resumed to win the Tramway, followed by an even more impressive performance second-up in the Underwood when he gapped his rivals by two lengths. 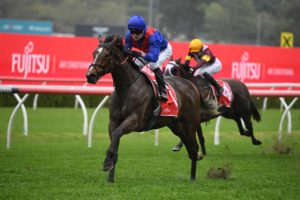 Zaaki remains the short-priced favourite ahead of the 101st edition of the Ladbrokes Cox Plate. Photo: Ultimate Racing Photos.

Zaaki failed to find his usual turn of foot down the straight last time out, finishing 2.5L behind Probabeel in the Might and Power. The tempo clearly didn’t suit him that day, but James McDonald will have plenty of options at his disposal as he jumps back in the saddle.

Godolphin’s lightly raced three-year-old will jump from barrier 10 under Craig Williams as he steps out beyond 1600m for the first time.

The son of Street Boss has missed the money only once from 10 starts and has been an extremely consistent customer at the elite level, winning both the Sires’ Produce during the autumn and the Caulfield Guineas two weeks ago.

For those looking for value, Verry Elleegant is the obvious standout at the current $7.50 quote.

Chris Waller’s mighty mare is still in search of her 10th Group 1 win after finishing 2.5L off last week’s Caulfield Cup winner Incentivise in the Turnbull.

The six-year-old finished down the straight in the 2019 edition of the Cox Plate but is no doubt a major player with any rain about over her preferred distance.

French import Gold Trip can be found on the second line of betting in what will be his first start for Ciaron Maher and David Eustace, one of Australia’s top staying stables.

The five-year-old has returned only one win from 10 starts overseas but brings with him strong recent form after finishing runner-up in the Group 1 Ganay and third in the Sant Cloud over 2400m.

Probabeel, meanwhile, has arrived at her grand final looking to follow in Winx’s footsteps by becoming the 17th horse to complete the Caulfield Stakes – Cox Plate double.

The Savabeel mare has won previously over 2040m but is 0-for-2 at The Valley in her career.

Last but not least, Hugh Bowman is looking to tie Darby Munroe’s all-time record with a fifth Cox Plate win.

The champion hoop will saddle Zaaki’s stablemate Mo’unga on Saturday, winner of the Rosehill Guineas and the Winx Stakes.

The four-year-old strips fitter for three runs back but does look a slight query racing at The Valley for the first time.