2021 Caulfield Cup Results: Incentivise Dominates on the Way to the Melbourne Cup

The dual Group 1 winner was at short odds to win the Cup ever since he resumed to win the Makybe Diva Stakes last month at Flemington, and that price only grew shorter after the son of Shamus Award made it a double with another impressive win in the Turnbull Stakes three weeks later.

The Moody-trained gelding got into $2.30 with Ladbrokes bookmakers, up against a capacity field of stayers hoping to win the time-honoured race.

With a wet track and the tempo slow, Incentivise ducked for cover early on in what proved to be a race-winning move by Brett Pebble.

Melbourne’s top jockey settled third in the run behind the leaders Delphi and Persan, before shifting three-wide at the 800m mark to take up the lead rounding the turn.

From there, the rest was pretty much history as Pebble pressed the button at the 250m mark to go on and win by a cool four lengths.

“Awkward draw, and there’s 17 other jockey’s that have an opinion on how this race is going to run, so I was mindful of the fact that they weren’t just going to give him a soft lead,” Pebble told Racing.com. 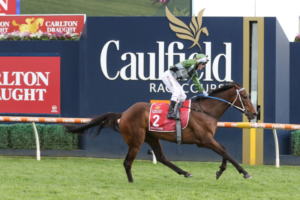 “There was a fair bit of wind out there so I thought I’m definitely going to get cover, even if it’s on the side there, for the first 1200m I just want him to enjoy the race and get into it. He doesn’t over-race and he doesn’t waste his energy like some of the others do.”

The win marked Group 1 number 32 for Pebble, and the third for Moody since he returned to the training ranks earlier in the year.

Moody, who only took control of Incentivise not long before he resumed in the Makybe Diva from Steve Tregea, said it was a milestone win.

“It’s unbelievable. Caulfield was my home or 16 or 17 years, and I trained a couple thousand winners here, never this one, but very important to win it,” Moody said after the race.

Incentivise also added to his own streak by making it nine on the trot since he first won his maiden on the Sunshine Coast earlier in April.

A win over 2400m at Eagle Farm during the winter stacked up well for his step up in trip, but it appears the team might be thinking of stretching him even further sometime very soon.

“He came off the bridle a little bit and I showed him the whip before the home turn, and all that’s telling me is, look out Melbourne Cup, he’s going to eat the 3200m,” Pebble said bullishly.

Like he was heading into the Caulfield Cup, Incentivise can be found as short as $2.80 in the Melbourne Cup market at Ladbrokes as he hopes to become the 12th horse and the first since Ethereal (2001) to complete the Caulfield – Melbourne Cup double.

Further down, Persan can now be found at $18.00 after fighting it out for the minors to run third on Saturday.

The 2021 Melbourne Cup market, courtesy of Ladbrokes.com.au can be viewed here.