Mr Brightside goes up in grade looking to extend his sensational winning streak to seven straight on Saturday as the well-supported favourite for the Group 1 $2 million Kennedy Cantala (1600m) on Day 1 of the coveted Melbourne Cup Carnival. 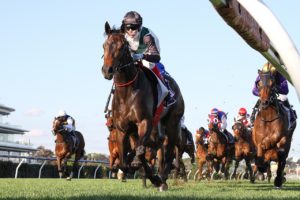 One of four elite level races on the Victoria Derby Day card at HQ, this season’s Kennedy Cantala field features 16 hopefuls led in betting at Ladbrokes.com.au by the ridiculously in-form Mr Brightside for Ben & JD Hayes.

An ultra-consistent four-year-old son of Bullbars, the horse heads to Flemington for the second time following a Benchmark 78 win here with 60kg over the mile on September 22.

On the back of that the Lindsay Park stable sent the gun galloper to Ballarat for the Listed Seymour Cup (1600m) where he posted a bullish 2.25 length victory.

One of the country’s best, Craig Williams, continues a lovely association with the Kennedy Cantala favourite with the jockey chasing his third win in the race in four years after recent victories aboard Best Of Days (2018) and Fierce Impact (2019).

Getting in on the 52kg minimum weight and drawn a treat in barrier six, Mr Brightside is certainly ticking plenty of boxes and looks deserving of his firming $4.20 Kennedy Cantala odds at Ladbrokes.com.au.

“Every time we’ve asked him to improve, he keeps improving, I’m hoping he can take that next step and run a good race on Saturday,” co-trainer Ben Hayes told SEN Track’s Bensley earlier in the week.

“It was always kind of our plans to try get into the Cantala with minimal weight, they don’t often go to plan and this one has.”

Four of the other Kennedy Cantala runners are under double-figures to win including Aramayo ($8.50) for the race’s four-time winning trainer Chris Waller whose latest victory was Yulong Prince last year.

Glen Boss comes aboard the Poet’s Voice six-year-old who presents rock-hard fifth fourth up off a trio of Group placings in Sydney.

The latest saw him narrowly defeated by $7.5 million Golden Eagle hopeful Private Eye in the Group 1 Epsom Handicap (1600m) on October 2 at Randwick.

While there are no queries over the distance, Aramayo is zero-from-four at Flemington where he is yet to finish in the money.

The gelding also rises from 51.5kg in the Epsom to 53.5kg so will need to be very good to challenge the favourite.

Equal second elect in betting at the $8.50 quote is Chaillot for Archie Alexander.

A five-year-old daughter of Testa Rossa, she is the shortest-priced of the mares in this year’s event and was fourth here under a length off Shout The Bar in the Group 1 Empire Rose Stakes (1600m) on this day 12 months ago.

Chaillot kicked off her spring in late September with a narrow win over Begood Toya Mother in the Listed Testa Rossa Stakes (1300m) at Sandown and with a flawless first-up record, has been kept fresh since.

One thing working against the mare however is her barrier 12 draw with history showing 10 of the last 13 Kennedy Cantala winners have started from a single-digit barrier.

Riodini ($9.50) for the Waterhouse/Bott stable looking to atone for his 11th with excuses in the Epsom and the Danny O’Brien-trained Superstorm ($9.50) drawn barriers 10 and 14 respectively are considered the others most likely.

Superstorm may be drawn wide but the Sebring five-year-old, previously prepared in Perth by Grant  & Alana Williams, rarely runs a bad race and comes off back-to-back thirds behind Zaaki and I’m Thunderstruck respectively in Group 1 company.

The 2021 Kennedy Cantala is scheduled to run as Flemington Race 8 at 5:10pm (AEDT) on Saturday’s race card.