All the money is on Western Empire to keep the wins coming in Perth on Saturday with the last start Railway Stakes winner odds-on favourite to take out the Group 1 $1 million Kingston Town Classic (1800m) at Ascot Racecourse. 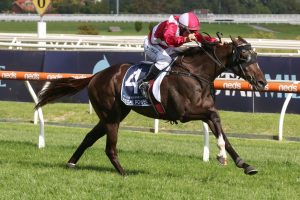 Ten hopeful horses line-up in this season’s Kingston Town Classic field, the weight-for-age classic bringing an end to Group 1 racing down under for another calendar year.

Drawn in gate nine with the ‘Wizard of the West’ William Pike retaining the ride is the gun Grant & Alana Williams-trained Western Empire.

A four-year-old son of Iffraaj, the gelding has won his past six starts including a demolition job last time out when taking out the Group 1 Railway Stakes (1600m) by four lengths.

Looking to complete the Railway Stakes – Kingston Town Classic double in the same year for the first time since Sniper’s Bullet (2009), Western Empire now goes up from 53kg to 58.5kg.

Despite the increase in weights, the horse is at a very short $1.45 quote in the latest Kingston Town Classic odds at Ladbrokes.com.au.

Fit third-up and ready to fire, he is being dubbed the next big thing in WA racing and should relish the 1800m having won the Group 1 WATC Derby (2400m) as a three-year-old in the autumn.

They return chasing successive wins in the event this weekend with the favourite and his 2020 $5 million All-Star Mile winning stablemate Regal Power.

Regal Power jumps one closer the inside in gate eight with Patrick Carbery coming aboard the six-year-old son of Pierro.

Winner of the WATC Derby – Railway Stakes double in 2019, Caulfield’s second running of the All-Star Mile in March of 2020 was Regal Power’s last victory.

He comes off back-to-back fourths this prep, the latest seeing him beaten only two lengths by Massimo in the Group 2 Lee Steere Stakes (1400m) on November 6.

Regal Power is the only other horse under $10 in the Kingston Town Classic markets at Ladbrokes.com.au paying $6 to upset his star young stablemate.

The other threat at a current quote of $10 is the ultra-consistent David Harrison-trained Searchin’ Roc’s.

An up-and-coming Awesome Rock filly, the exciting three-year-old gets in on just 50kg at weight-for-age in the Kingston Town Classic and has won five of her seven starts to date.

At her last start on November 13 she won the Group 3 WA Champion Fillies Stakes (1600m) and on Saturday she is out to emulate Arcadia Queen (2018) by doing the double.

Searchin’ Roc’s is drawn a treat in barrier three with Ms Kyra Yuill retaining the ride, the filly’s Serpentine-based trainer Harrison after his second victory in the race following a 2002 win with Blevvo.

“It’s always better to go into a big race in form and she has that,” Harrison told Just Horse Racing this week.

“Blevvo had the same type of form and it always helps.

“It’s better going in in good form than bad.

“But we are going to have to rely on luck, particularly with Western Empire and Regal Power.

“Regal Power won an All Star Mile and Western Empire could be anything.

“But Searchin’ Roc’s is holding form and anything can happen in racing.

“She’ll be doing her best and if she finishes in the placings, I’ll be happy.”

The 2021 Kingston Town Classic is scheduled to run as Ascot Race 8 at 4:45pm (AWST) on the Perth race card for Saturday.