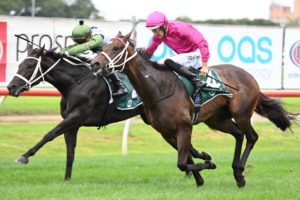 One of the seven Tancred Stakes Day races postponed from Rosehill’s washout last Saturday, the Vinery Stud Stakes was in the end a two-filly battle to the line.

After closing in on and running past the leader Never Been Kissed on the home straight, Fangirl and Hinged off their on-speed runs went stride for stride over the final furlong.

It was the Hugh Bowman-ridden Fangirl, ridden much closer in fourth throughout as the spring’s Flight Stakes winner Never Been Kissed set a solid pace up front, who was able to wear down her Surround Stakes winning stablemate Hinged and win by a head on the line.

“Well deserved. It has been a tough autumn for so many of the horses, especially the fillies. Chequered form lines, I get, but just what my team at home do to pick these horses up, especially young horses, and try and turn them around after perhaps a disappointing run last start is quite remarkable,” Waller told Sky Thoroughbred Central.

“Great idea to bring the races to Newcastle. We’ve got some great tracks in Sydney but this has really shown its worth and (I’d be) probably suggesting some investment in Sydney to get something similar because it’s such an important time of the year to be running good horses on good tracks. It brings the best form-lines out in my opinion.”

It was a turning of the tables for Fangirl who had previously finished fourth to Worthy Cause filly Hinged, seventh in the Light Fingers, in the Group 1 Surround Stakes (1400m).

She also atoned for her lead-up fourth as the beaten favourite in the Group 2 Phar Lap Stakes (1400m) against the boys on March 12, the form of which was further franked earlier on the Newcastle card on Monday with the winner Mr Mozart taking out the Group 3 Doncaster Prelude (1500m).

“It’s lovely to win a Group 1 in the all cerise – the Ingham family obviously huge in racing since before I was around and of course they’ve been with Chris (Waller) and the team for so long, and I’ve ridden so many wonderful horses for them but I think this is actually the first Group 1 – Group 1 winner anyway,” Vinery winning hoop Bowman said.

“It was (a tussle). I got to Hinged very easy but I was mindful of timing my run because I could feel there wasn’t a lot left in the tank and when I finally did ask for full effort, I only got a neck in front and Brenton came back to make that margin a little closer but she was so gallant. She’s a lovely filly and she’s been beautifully managed by the master (Waller).”

After travelling back fifth and fourth last throughout, David Vandyke‘s previously undefeated favourite Gypsy Goddess made up late ground to run third nearly five lengths back for the Queenslanders in the Vinery Stud Stakes trifecta.

The best out of the Vinery are likely to renew rivalries at Royal Randwick on April 9 in the Group 1 $1 million Australian Oaks (2400m).

Gypsy Goddess is the current all-in 2022 Australian Oaks favourite at $4.50 through Ladbrokes.com.au with Fangirl ($6) and Hinged ($7) following closely.