The field is set for Wednesday’s Group 1 $1,000,000 Schweppes Thousand Guineas (1600m) with 13 three-year-old fillies accepted for the mile feature at Caulfield’s mid-week meeting. 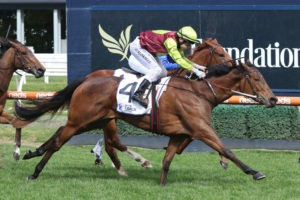 Prelude winner Bon’s A Pearla is at big odds to do the double in the Group 1 Thousand Guineas this Wednesday. Photo: Ultimate Racing Photos.

Moved this year from the Caulfield Guineas Day card run last Saturday, the Thousand Guineas is now the marquee race on Wednesday and it shapes up as an open edition.

Current favourite in the Thousand Guineas markets at Ladbrokes.com.au following Monday’s final acceptances is the in-form and lightly-raced Zouzarella for Anthony & Sam Freedman.

Drawn a treat in barrier two with the flying Brett Prebble in the saddle, this daughter of Zoustar has just her fourth career start and is up notably in grade.

As yet untested in Group company, she won two-from-two earlier this prep at The Valley to kick off her career including a two-length win in the Listed Atlantic Jewel Stakes (1200m).

She may have failed to stay undefeated when racing in Sandown’s Listed Jim Moloney (1400m) on Underwood Stakes Day, but her one length loss saw her loose few admirers.

Down from 57.5kg there to 56kg at set weights and getting out to a mile and she’s a genuine chance to handle her acid test and salute for the punters.

Looking to frank the Sydney form heading south on Wednesday is the Chris Waller-trained second elect Hinged in barrier nine with Damian Lane to ride.

A winner of five of her nine career starts so far, the Worthy Cause filly was very good at Randwick on October 2 when going down in a photo to Never Been Kissed at big odds in the Group 1 Flight Stakes (1600m).

Never Been Kissed franked the form last weekend when runner-up to Profondo in the Group 1 Spring Champion Stakes (2000m), which bodes well for Hinged in Melbourne on Wednesday.

The Queensland expat has previous winning form in Brisbane and looks a livewire hope to hand Waller his second Thousand Guineas victory following his 2014 success with Amicus.

After securing her 10th Flight Stakes win, co-trainer Gai Waterhouse is looking for another Group 1 victory in a mile race for fillies and her second Thousand Guineas trophy after Global Glamour’s win in 2016.

Waterhouse and Adrian Bott saddle-up two Thousand Guineas runners this spring with Swift Witness coming off a fourth in the Flight Stakes and Zouzarella’s last start conqueror Queen Of Dubai drawn wide in barriers 12 and 10 respectively.

Chasing a hat-trick of wins and jumping from a favourable barrier three draw with Craig Williams in the saddle is the Jerome Hunter-trained Rebel Raider filly Barb Raider.

She drops in distance after an 1800m victory by two lengths at Flemington on September 22, prior to which she carried 59.5kg to a 3.5 length victory over the mile at Sandown.

Barb Raider is absolutely airborne this campaign but is up in grade and could be looking for further than the 1600m.

Also coming off a lead-up win is the last of Wednesday’s single-figure hopefuls, Elusive Express in gate 11.

The second runner for the Freedmans, the Kiwi-bred Jakkalberry filly is out to upset her top-fancied stablemate after a three-quarter length win in the Group 2 Edward Manifold Stakes (1610m).

Prior to that she ran third in the Group 2 Thousand Guineas Prelude, the winner of which Bon’s A Pearla is at a generous quote of 15/1 to do the double last completed by Irish Lights (2009).