Former Queensland-trained star Alligator Blood went a long way to putting controversy behind him with an impressive upset in the Group 1 $1.5 million Stradbroke Handicap (1400m) for his new trainers Gai Waterhouse & Adrian Bott. 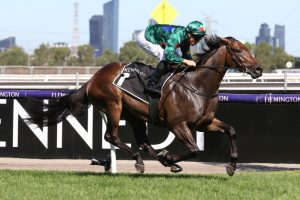 Winner of the Group 1 Australian Guineas as a three-year-old at Flemington back in February of 2020, the now five-year-old son of All Too Hard celebrated his first victory since at Eagle Farm in Brisbane’s showcase race.

Handing co-trainer Waterhouse her 150th career Group 1 and, incredibly, her maiden Stradbroke Handicap trophy, the galloper was given a gun ride from out wide by jockey Tim Clark.

“As has been well documented over the last year or two the horse has had problems. But Gai and Adrian, the staff back at Randwick and also up here in Brisbane have worked overtime to get this horse right.

“I was telling the owners before he’s just such a happy horse and a great horse to do anything with. We’re rapt that we’ve got him and he’s come back to his best.

“We were a bit wary first up two weeks ago but when he put that run on the board, he had improved so much since. Tim Clark came up and rode him on Tuesday and said this horse is flying.

“He looked at treat in the yard, it’s just incredible that Gai and Adrian could get him back to where he is.”

Clark was aboard for the horse’s Waterhouse/Bott debut a fortnight back at the track when, also coming from the second outside alley, he went down a nose in the Group 3 BRC Sprint.

Better for the run and relishing the 1400m, Alligator Blood this time overcame gate 17 of 18 producing a huge finish on the home straight to be crowned this winter’s Stradbroke Handicap winner.

With the Rob Heathcote-trained Rothfire getting plenty of support in the markets, it looked like a potential local fairy tale with the former JJ Atkins winning horse in the lead.

Inside the final furlong however, Clark and Alligator Blood ($11) put down the challenge, charging up the middle of the track to take over.

Flashing home late off a luckless run throughout, Joe Pride‘s former Epsom Handicap champ Private Eye ($17) nearly stole the show closing hard, but ultimately running out of time after being held up at a crucial point to run second.

On the line, Alligator Blood had a length to spare on Private Eye, while the front-running Rothfire ($11) held to run a distant third nearly three lengths off the winner.

“He began well but as expected there was a fair bit of tempo and not only did I not have the horse to be in that speed battle I knew if I attempted to be with them I’d have nothing left at the end,” winning hoop Clark said after the race.

“So I was able to slide across back in behind them and it ended up working out lovely. I got the back of Ayrton and that horse took me everywhere I needed to go.

“On straightening it was a matter of just being patient, letting him build through his gears and I thought all he has to do is find off the bridle.

“He showed a great turn of foot. I haven’t had a lot to do with the horse’s career but that was a pretty special performance.

“I rode him first up here and obviously he went terrific. I came up and worked him on Tuesday, he’s a pretty casual horse so he did as much as you’d expect him to do but with that run under the belt he had taken that bit of improvement.

“I was a bit dejected when he drew that barrier but it panned out beautiful for him.

“Great to ride another Group 1 winner for Gai and Adrian. Gai’s 150th and first Stradbroke. I’m sure they’d be stoked.”