Annavisto for Mick Price & Michael Kent Jnr. is the firm favourite to take out the final Group 1 of the winter carnival in Queensland when she lines-up in Saturday’s $700,000 Tattersall’s Tiara at Eagle Farm. 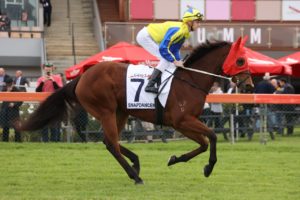 Group 1 Robert Sangster Stakes winner Snapdancer has work to do from an outside alley in Brisbane’s 2022 Tatt’s Tiara this weekend. Photo: Jenny Barnes.

A capacity field of female gallopers takes to the track in Brisbane this weekend and the latest markets on the 1400m clash have Reliable Man four-year-old Annavisto on top.

Presenting fresh with an impressive first-up record (4:3-1-0), she was last seen running second at big odds behind Nimalee in the Group 1 Queen Of The Turf Stakes (1600m) on a Heavy (10) at Randwick on back on April 9.

She’s been kept fit with two subsequent trials and will relish a firmer track this weekend.

The danger occupying the second line of Tattersall’s Tiara betting at $6.50 is the widely-drawn Snapdancer for Ciaron Maher & David Eustace.

The last start Group 1 Robert Sangster Stakes winner in Adelaide 49 days ago come Saturday will jump from the outside barrier this Saturday chasing the interstate double.

Jockey Ethan Brown retains the ride after guiding the Choisir five-year-old to her 1.5 length upset at big odds at Morphettville over Away Game and September Run on May 7 from barrier 15 of 15.

The mare has been brought on fitness wise with a subsequent winning Deagon trial, but she’ll need to be good stretching further with only the one second from her four previous 1400m runs.

That broke a length winning drought for the Zoustar four-year-old who is back in distance chasing the double drawn gate 10 with Tommy Berry to ride.

Along with the market mover Kiku, the master Sydney-based horseman also saddles-up three other confirmed starters plus the third emergency.

The other Waller runners confirmed a run in Saturday’s Tattersall’s Tiara field are his National Classic placegetters Nudge ($14) and Atishu ($12), along with roughie hope Written Beauty ($31) coming off a fifth in the Group 2 Dane Ripper Stakes (1300m) here on June 11 under two lengths beaten.

Rounding out the single-figure fancies meanwhile is Snapdancer’s stablemate, the fellow Maher/Eustace runner Away Game ($9.50) drawn out in gate 17 with William Pike aboard.

The former top-line filly is looking to return to her better form, the now four-year-old Snitzel mare not having won since her Group 3 WJ Healy Stakes (1200m) win on this day last year.

She has run top three in a host of subsequent elite level events including her Group 1 Oakleigh Plate (1100m) second back in February, and her second to Snapdancer in the Robert Sangster.

Her last start on May 28 at Eagle Farm saw her finish 10th, albeit only three lengths behind the winner Apache Chase, in the Group 1 Kingsford-Smith Cup (1300m).

This shapes up as a more suitable assignment for her and she presents as one of the main chances.

The 2022 Sky Racing Tattersall’s Tiara is set to run as Eagle Farm Race 8 at 3:53pm (AEST) on Saturday’s nine-race card.