Jockey Daniel Moor celebrated his birthday in style enjoying his maiden Group 1 victory thanks to a gun ride aboard a quality mare with Sierra Sue taking out the Group 1 $1 million Neds Sir Rupert Clarke Stakes (1400m) at Caulfield. 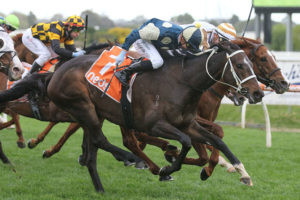 Moor was overcome with emotion post-race after the late win by the Trent Busuttin & Natalie Young-trained Darci Brahma mare in the race at 10/1.

Winner of the Mildura Cup – Group 2 P.B. Lawrence Stakes double, it has been a far from typical campaign for the five-year-old.

Sierra Sue was unplaced last start at The Valley in the Group 2 Feehan Stakes, a blessing in disguise as it kept her at just 52.5kg in the Sir Rupert Clarke Stakes.

That light weight and a perfectly-timed ride down to the second by Moor saw her come away a deserved Group 1 winner.

Moor took all the luck out of the equation, getting Sierra Sue into clear air on the straight before charging home to deny the runner-up Dice Roll in a gripping finish right on the line.

Third went to the brave emergency I’m Thunderstruck, the Shocking four-year-old catching the eye going up notably in grade.

There are now plenty of options for Sierra Sue looking further ahead for the spring, including a potential invite into the inaugural $2 million The Invitation (1400m) at Royal Randwick in Sydney for fillies and mares on October 23.

Busuttin however said the team were leaning towards keeping her down in Melbourne with the Group 1 $1 million Empire Rose Stakes (1600m) at Flemington on Victoria Derby Day, October 31, a potential target.

“I suppose the Rupert Clarke into the Empire Rose. She’s doing plenty of racing.

“That $2 million race in Sydney’s not bad, but I can’t get up there so we might stay down here.”