Eleven-time Group 1 champion Verry Elleegant could line-up in her career swansong as she looks to take her elite level wins to a dozen in a star-studded edition of the Group 1 $4 million Queen Elizabeth Stakes (2000m). 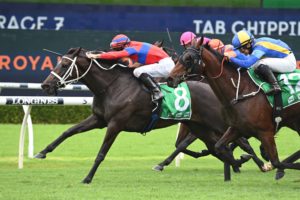 Nine horses chase the riches on offer in Saturday’s marquee race at Royal Randwick, the weight-for-age Queen Elizabeth Stakes one of four Group 1 events on Day 2 of The Championships.

Punters are in for a stellar edition and it is the spring’s Melbourne Cup hero and dual Queen Elizabeth runner-up Verry Elleegant leading markets at Ladbrokes.com.au.

After running second to the international raider Addeybb in 2020 and 2021, the now six-year-old daughter of Zed is back and tipped to take it out ahead of a potential trip to Paris.

Connections have suggested that a comprehensive victory this weekend would go a long way in their decision on whether to send the $14.77 million earner overseas for the famous Prix de l’Arc de Triomphe (2400m) next spring.

“She has to stand up again for us to make a call on the Arc,” part-owner Ozzie Kheir, who also races star Australian Derby winning colt Hitotsu, told Racing.com.

“The reality is that if she doesn’t run to her best on Saturday then that (Arc) probably won’t happen and then we’d have to decide whether to go on with her.”

Kheir however remains confident she can turn the tables and atone in the Queen Elizabeth to potentially complete her Australian race campaign.

“I think she will be very hard to beat,” he said.

The bookies agree and have Verry Elleegant, drawn in barrier seven with James McDonald in the saddle again, at $3.70.

It is an open and exciting instalment ahead looking at the markets with three runners hot on the heels of the favourite including the James Cummings-trained three-year-old Anamoe ($4.20).

The brilliant Street Boss colt is out to be just the sixth three-year-old in history to win the event and the first since Tulloch back in 1958.

He was so good last time out when annihilating his rivals by seven lengths in the Group 1 Rosehill Guineas (2000m) and has Tommy Berry coming aboard for his grand final in gate five on Saturday.

At the same price in the latest Ladbrokes markets is the Annabel Neasham-trained Victorian visitor Zaaki.

A rising eight-year-old, the imported star was excellent at Flemington on March 19 from barrier 15 of 15 winning the $5 million The All-Star Mile (1600m) by one and a half-lengths.

That form was firmly franked in last Saturday’s Group 1 Doncaster Mile (1600m) with the first three horses over the line in the trifecta all graduates out of The All-Star.

That included Mick Price & Michael Kent Jnr’s runner-up in both events, I’m Thunderstruck, and the four-year-old son of Shocking goes around again on Saturday.

I’m Thunderstruck was only a half-length off Mr Brightside carrying 55.5kg in the Doncaster and is on the quick back-up with 59kg in the Queen Elizabeth as a $15 chance.

The other best fancied at $4.50 meanwhile is the Edward Cummings-trained Duais back to her brilliant best chasing a third straight Group 1 win.

The four-year-old daughter of Shamus Award, previously best known for her 2021 Queensland Oaks win, was dominant at headquarters on Super Saturday winning the Group 1 Australian Cup (2000m) by two lengths.

She then went to another level in the rescheduled Group 1 Tancred Stakes (2400m) at Newcastle on March 28 powering over the top of them by over three lengths.

This weekend Duais is looking to become the 11th to do the Tancred Stakes – Queen Elizabeth Stakes double and the first since Eremein in 2006.

There are 10 races scheduled for Randwick on Saturday with the track currently rated a Heavy (8) and showers predicted for the rest of the week.