Newcastle’s Broadmeadow Racecourse will host the seven rescheduled races on Monday the 28th of March from the abandoned Tancred Stakes Day 2022 meeting. 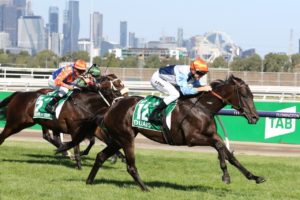 In Sydney on Saturday Racing NSW and the Australian Turf Club were forced to call off the Rosehill Gardens meeting after the opening three races due to unsafe racing conditions.

The track was downgraded to a Heavy (10) after the first and, with subsequent heavy rainfall between races 1 and 3, the decision was made to postpone the remaining events.

It was a decision backed by leading jockeys including James McDonald who said the vision was near impossible due to the rain.

“It’s no fault of anyone – it’s the weather gods,” jockey James McDonald said.

“It has just been the rain on the day. I couldn’t see a thing.”

With many of the meeting’s events serving as important lead-ups to the opening day of The Championships at Royal Randwick this Saturday, April 2, the decision to move the remaining races to Newcastle on Monday was made.

All scratched horses have been reinstated with jockeys to be confirmed.

With no 2000m start at Newcastle, two of the support races will run over an amended distance of 1850m:

The Group 3 $160,000 Doncaster Prelude (1600m) has also been rescheduled with the winner offered a ballot exemption into the Group 1 $3 million Doncaster Mile (1600m) on Day 1 of The Championships.

Leading Sydney horseman Chris Waller said it was important to back the decision despite the challenges presented by distance amendments and shorter potential back-ups for the horses.

“I think what we have learned during COVID is there has to be a willingness to change,” he said.

“We need to respect these decisions when they are made.

“I think we have to respect the decision and work with it.”

After the Broadmeadow course proper was a Heavy (8) when hosting the transferred Wyong Provincial-Midway Championships Qualifier on Saturday, as of Sunday morning it had firmed into a Soft (7).