Moir Stakes 2021 Field Face Off At The Valley

Group 1 racing returns to The Valley on Friday night with an outstanding twilight meet scheduled highlighted by the sprinters doing battle in the Group 1 $1 million Moir Stakes (1000m). 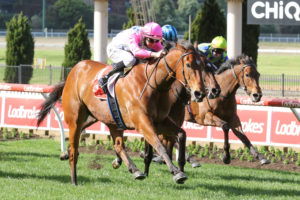 A field of eleven face off in this year’s Moir Stakes field and the latest markets at Ladbrokes.com.au are led by returning Capitalist colt Profiteer.

The youngster takes on the older sprinters fresh running for the first time since his midfield finish in the Group 1 Golden Slipper Stakes (1200m) at Rosehill on a Soft (7) and looks well-weighted with just 52kg.

He is tipped for a bold first-up run on firmer going on Friday night and jumps from gate seven with Jye McNeil to ride the current $4 top elect.

Co-trainer Mick Price is after his third Moir Stakes success following his previous wins with Samaready (2013) and Extreme Choice (2016).

He is confident Profiteer is ready to go on Friday night after the three-year-old put in a good effort during his Monday track work.

“He was good, I wanted a solid hit out and he pulled up good, Jye has had about four goes on him and the horse is good,” Price said on SEN Track’s Bensley.

“If he was going in an average race anywhere, he’d win, but it is a Moir, it is a Group 1 but he’s had a good prep and he’s ready to go.

“He handles The Valley no worries.”

Former Singapore sprinter The Inferno presents as a danger on the back of his good lead-up win in the Group 2 McEwen Stakes (1000m) earlier in the month.

Also out of the McEwen Stakes, run at the same track and distance as the Moir, are the Group 1 winning runner-up Portland Sky (2nd) and Chris Waller’s Coolmore Stud Stakes winning filly September Run (3rd).

September Run meanwhile is out to go back-to-back for the mares in the Moir Stakes following the 2020 victory of Pippie.

Waller won the Moir two years ago with his star sprinter Nature Strip and second-up, his four-year-old daughter of Exceed And Excel from the inside alley with John Allen aboard looks a genuine threat.

Looking to frank the Sydney form meanwhile is the Peter & Paul Snowden-trained Snitzel entire Wild Ruler who resumed with a second to Nature Strip in the Group 3 Concorde Stakes (1000m) on September 4.

Team Snowden opted not to run Wild Ruler in the Group 2 The shorts last weekend in favour of the Moir where the horse runs in Melbourne for the first time since his third to September Run in Flemington’s Group 1 Coolmore Stud Stakes last Derby Day.

Also in the mix is last year’s runner-up Trekking for Godolphin, the now seven-year-old Street Cry gelding having run a first-up third in the Concorde Stakes.

Trekking continues to produce consistent runs against top class horses, but hasn’t won a race since taking out the Group 1 The Goodwood in Adelaide last May.

There has also been early money for the Joe Pride-trained Smart Missile mare Ballistic Lover who won the Listed Carlyon Stakes (1000m) at The Valley in August.

With a potential slot in the $15 million The Everest up for grabs, it is sure to be a competitive edition of the Moir Stakes with the event set to run as Moonee Valley Race 7 at 8:15pm (AEST) on Friday evening.