In The Congo New Favourite for 2021 Coolmore Stud Stakes 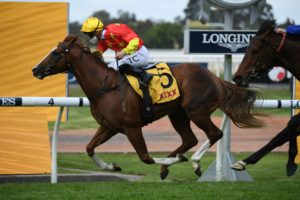 One of four elite level races on the opening day of the coveted Melbourne Cup Carnival, the time-honoured sprint up the iconic ‘Straight Six’ at HQ has drawn a star-studded field of 17 this year.

The early money at Ladbrokes.com.au is coming for smart Snitzel colt In The Congo who has firmed into $4.20 favouritism (at time of publish) to hand co-trainer Waterhouse her first win in the race since Northern Meteor back in 2008.

Anamoe franked that form going down in a thriller to Irish raider State Of Rest in the Group 1 $5 million Ladbrokes Cox Plate (2040m) last weekend, which bodes well for In The Congo here for his first run outside of Sydney.

The straight is always the query for those from north of the border seeing it for the first time, but In The Congo gets the blinkers on here to help keep him focused on that finish line.

The other best-backed runner is one-time favourite Extreme Warrior ($4.40) for one of the spring’s best performing training duos, Mick Price & Michael Kent Jnr.

The up-and-coming Extreme Choice colt has won his past two starts by a combined eight lengths, the latest a 3.75 length romp home on Thousand Guineas Day in the Group 3 Blue Sapphire Stakes (1200m) defeating Profiteer.

This is a rise in class however and how he handles the straight will be key to his chances, but he has gun hoop Jye McNeil aboard aiding his chances.

Despite the issues sire Extreme Choice has had fertility-wise, the progeny he has produced have been winning plenty and another of his son’s running in this year’s Coolmore Stud Stakes at more generous odds is Extreme Flight ($26).

The Anthony & Sam Freedman-trained colt chases a fourth consecutive victory and comes back to the six furlongs off a tight finish at Caulfield in the Listed Gothic Stakes (1400m) last time out.

Winner of the Group 1 Blue Diamond as a two-year-old, Artorious ($8.50) lines-up here from gate four with Glen Boss aboard the recent perennial placegetter.

The Flying Artie colt has been very consistent but a frustration for the stable with so many close calls including running fourth under two lengths off In The Congo in the Golden Rose.

Last time out he was excellent when third to Anamoe in the Caulfield Guineas at a mile and he gets his chance to return to the winners’ stall back to 1200m fifth-up and fit.

Kallos is the widest-drawn out in gate 15 chasing a third win on the trot after the Medaglia D’Oro colt’s impressive two length win at the track on October 2 in the Group 2 Danehill Stakes (1100m).

He should easily handle the extra 100m here, has been kept fresh since and Fred Kersley retains the ride making him a nice value consideration at $11.

Paulele in barrier six with Damien Oliver aboard is shorter in the markets at $7 presenting as one of the genuine dangers after a host of excellent lead-up runs in Sydney including the Group 2 Roman Consul Stakes (1200m) victory at Randwick.

Ingratiating meanwhile is at 20/1 to go two better than a third at The Valley behind Jonker in the Group 1 Manikato Stakes (1200m) on Cox Plate Eve.

He was solid there only 2.35 lengths beaten, has a lovely Flemington record (5:2-2-0) and Daniel Moore is booked for the ride in another plus.