Local Morphettville horseman Gordon Richards admits it was a tough decision but he’s gone with Jason Collett who has secured the prized ride aboard Gytrash in Saturday’s Group 1 $502,250 The Furphy Goodwood (1200m). 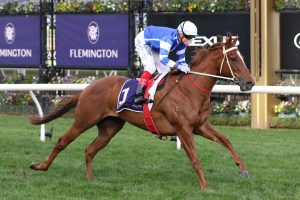 Gytrash is narrow favourite in 2021 The Goodwood betting for Adelaide this weekend. Photo: Ultimate Racing Photos.

Richards was tossing up between Collett and Jason Holder, opting for the former to ride the exciting sprint star fresh first-up six-month break in The Goodwood 2021 field at Morphettville.

“I anguished over jockeys Jason Holder and Jason Collett but was able to get Jason Collett to come down as he won on him in Sydney,” the trainer told the media this week.

Both jockeys have a good record aboard the champion Lope De Vega gelding, but it was Collett who guided the horse to victory last time out in Rosehill’s $1 million Yes Yes Yes Stakes (1300m) in the wet last November.

Following that Gytrash was found to have a bone chips in his knee and underwent minor surgery to remove the chips.

The striking five-year-old is now ready to return to the track, much to the pleasure of the punters, having enjoyed his time off in the paddock.

“He hasn’t turned a hair since being back in this preparation,” Richards said.

“I was very happy with a recent jump-out so it’s all good.”

Gytrash was runner-up behind Godolphin champ Trekking in last year’s The Goodwood results beaten the barest of margins with Holder in the saddle, and is tipped to go one better on Saturday.

His spring was an outstanding preparation that included a Group 3 Concorde Stakes win over Australian Horse of the Year Nature Strip before his third in the world’s richest turf race, the $15 million The Everest at Randwick on October 17.

“Sydney was a great experience and an exciting time,” Richards said.

Collett was aboard for Gytrash’s entire spring campaign and will guide The Goodwood favourite from a favourable barrier four draw fresh with the jockey chasing his maiden win in the popular South Australian sprint event.

The latest The Goodwood odds at Ladbrokes.com.au are firming on Gytrash to return a winner with the galloper backed in from $3.60 to $3.20.

The danger looking at The Goodwood betting markets and according to Richards is the fellow South Australian champion, the hulking David Jolly-trained Behemoth ($4.20).

Also drawn well in barrier six, Behemoth will be ridden by Craig Williams who is after a second success after riding the 2017 The Goodwood winner Vega Magic to victory for Lindsay Park four years ago.

For ultra-consistent All Too Hard gelding Behemoth, Saturday will be his third shot at winning The Goodwood following his second to Despatch in 2019 and fourth last Adelaide Autumn Racing Carnival.

A Group 1 winner in Melbourne’s Sir Rupert Clarke Stakes last September with Williams in the saddle, the now five-year-old races for the first time since his credible third to Mugatoo at The Valley in mid-March’s $5 million The All-Star Mile (1600m).

Outside the dominant duo the other best in betting is Phillip Stokes’ Robert Sangster Stakes winning filly Instant Celebrity ($6).

The progressive three-year-old daughter of Not A Single Doubt took her Morphettville track record up to three wins from four starts beating home the older mares a fortnight back in the Group 1 Robert Sangster Stakes (1200m).

Craig Williams was aboard for that big performance and he’s replaced by the season’s best Ms Jamie Kah on the weekend as Instant Celebrity looks to complete the Robert Sangster – The Goodwood double for the first time since Platelet (2013).

The Goodwood is set to run as Morphettville Race 8 at 4:22pm (AEST) on Saturday’s Adelaide race card.