With hype building all week, this year’s Turnbull Stakes did not disappoint as Peter Moody’s brilliant young stayer Incentivise claimed the $1 million feature at Flemington.

The head-to-head battle between Incentivse and nine-time Group 1 winner Verry Elleegant made the Turnbull one of the most anticipated races of the spring, but it was the son of Shamus Award who walked away with the chocolates thanks to another masterful ride from Brett Pebble.

Like they did a fortnight ago in the Makybe Diva Stakes, the pair got away cleanly from the gates before settling second behind Mount Popa, who was determined to set a quick time.

From there, Incentivise allowed his rivals to close in down the straight, only to keep finding the line in another arrogant win from the front.

With sights set on the Caulfield Cup in a fortnight’s time, Moody said it was important for Incentivise to get some work in on Saturday ahead of another potential tilt with Chris Waller’s mighty mare. 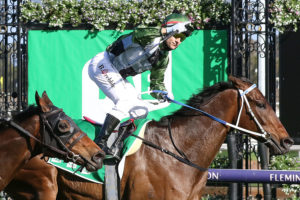 “We wanted to have a good gallop, we needed to take improvement away from today into the Caulfield Cup, and Mount Popa made sure we had a good gallop,” Moody told Racing.com.

“Brett (Pebble) thought he wanted to be on the inside, he thought that was probably the best part of the track, so he did well to hold that and it ended up being a good test.”

Plenty of experts had question marks over the five-year-old after he rattled off six wins on the trot up in Queensland over the winter, but after finding another gear in both runs back, there’s no denying he is as real as it gets.

Moody, who only took control of the horse back in August, went on to say Incentivise continues to show terrific courage.

“Unbelievably tough. He’s been there to be beaten sort of the length of the straight in both his runs,” Moody said.

As far as the Caulfield Cup goes, Incentivise is now into as short as $2.60 with Ladbrokes bookmakers, while Saturday’s second place-getter Young Werther can now be found as the $11.00 second-elect.

“This will really bring him on for the Caulfield Cup in two weeks, we probably came into this slightly soft and still learning about the horse and believing that this will just top him off lovely,” Moody concluded.

Verry Elleegant, meanwhile, missed out on a place for the first time since last year’s Melbourne Cup.