The return of Gytrash turned out to be an upset event as the heroic favourite only managed to run third in the Group 1 $500,000 The Goodwood (1200m) behind shock winner Savatoxl and the second-placed filly Instant Celebrity. 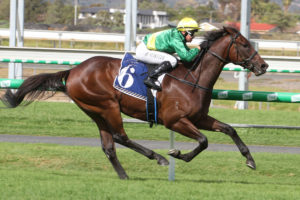 The Goodwood 2021 winner Savatoxl could head to Brisbane for the $1.5 million Stradbroke Handicap next. Photo: Jenny Barnes.

Former Alice Springs galloper Savatoxl has been racing in South Australia with Tony & Calvin McEvoy since late last year and has gone from strength to strength for the stable.

Last time out the five-year-old son of Kuroshio won the Group 3 DC McKay Stakes (1100m) at the Morphettville track by three lengths and he franked that form with another big two length win in The Goodwood 2021 when rising in class and distance.

Ridden to victory by Barend Vorster, the hoop made the most of a favourable barrier two draw and had the eventual The Goodwood winner settled up on the speed.

It was Dollar For Dollar leading the field around early, the front-running going on to fade and finish last, before Savatoxl moved up approaching the home turn.

He gave a big kick 300m out and charged up near the inside, while the Group 1 Robert Sangster Stakes winner Instant Celebrity was being given a gun ride up the rails by Jamie Kah.

She tried her heart out after settling last in the run, but failed to do the Group 1 double running second behind the surprise winner.

Vorster rode Savatoxl with great confidence, kicking him up to settle into that nice position and staying away from the middle of the track where a few of the challenges got into trouble out wider.

One of those was the returning star Gytrash in his first run in six months, The Everest placegetter and Yes Yes Yes Stakes winner getting pushed out by Behemoth around the turn before crossing third to round out trifecta.

Connections may now look to Queensland for a shot at Brisbane’s richest race, the Group 1 $1.5 million Stradbroke Handicap (1400m) a potential next-up target for Savatoxl on June 12 at Eagle Farm.

Santa Ana Lane (2018) was the most recent sprinter to complete The Goodwood – Stradbroke double that Savatoxl currently pays $17 through Ladbrokes.com.au to emulate.