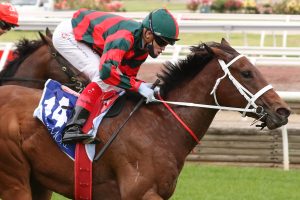 A quality field of in-form fillies and mares faces off in Saturday’s Robert Sangster Stakes and the latest markets at Ladbrokes.com.au have two-time Group 1 winner September Run as the one to beat at a steady quote of $4.80.

The four-year-old daughter of Exceed And Excel was last seen saluting at Moonee Valley under the lights in the Group 1 William Reid Stakes (1200m).

That was her second good run back this prep following on from a close third when only a half-length beaten in the Group 1 Newmarket Handicap (1200m) at HQ.

She now gets the chance to keep the good form going, this time heading to South Australia where she’s drawn well in barrier five and has last year’s Robert Sangster Stakes winning jockey Craig Williams in the saddle.

This season Instant Celebrity returns to defend her title looking to become history’s first dual Robert Sangster Stakes winner since the race was inaugurated in 1983.

Instant Celebrity, who has undergone knee surgery since her victory last year, currently pays $11 in the latest Robert Sangster Stakes odds online and is drawn gate 12 for jockey Daniel Moor.

Stokes remains confident he has the mare in good order after what he saw last start.

“We were worried first-up, worried that the pain was still in her head and whether she would let down,” he told RS NewsWire this week.

“If she hadn’t, I probably would have retired her, but she still wants to do it, so that’s pleasing.

“I thought the first-up run was really good, probably a bit better than last year before her win in the Sangster and she’s trained on nicely, however she’s got a bit of a sticky barrier.

“I don’t know how the track is going to play as they’ve had a bit of rain here.

“It could all come down to a bit of luck in running.

“We’re happy with where we stand, we’ve had no setbacks, so we’re looking forward to Saturday.”

She is drawn mid-field in gate seven with Kalya Crowther retaining the ride on the evergreen seven-year-old Commands mare who is at $15 to complete the RN Irwin – Robert Sangster double for the first time since Driefontein in 2014.

Following September Run in the markets meanwhile are the Ciaron Maher & David Eustace-trained duo of Bella Nipotina ($6) and Away Game ($8) drawn well in barriers three and one respectively.

This campaign she won third-up on a Heavy (10) in the Group 2 Sapphire Stakes (1200m) at Randwick, form the bookies are tipping to stack up in South Australia on Saturday.

Her former top-line stablemate Away Game, a winner of over $3.6 million in stakes, is chasing atonement after her mid-field seventh in the Group 1 The Galaxy (1100m) at Rosehill in March.

She was a close second behind Marabi in Caulfield’s Gorup 1 Oakleigh Plate (1100m) carrying less weight the start prior and is after her first victory since a Group 3 in Brisbane last June.

The 2022 Robert Sangster Stakes is scheduled to run as Morphettville Race 8 at 4:02pm (ACST) with a total of nine races scheduled on the card.