A capacity field of eligible three-year-olds take to the Gold Coast track on Saturday in one of the meeting’s two $2 million features with an open betting market for this year’s Restricted Listed Gold Coast Magic Millions 3YO Guineas (1400m). 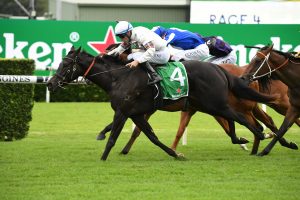 Current favourite at Ladbrokes.com.au for the set weights plus penalties clash is the Robert & Luke Price-trained Jamaea in gate eight with Tommy Berry partnering.

The dual Group 2 winning Headwater filly races at the Gold Coast for the first time and was last seen running a credible eighth when only four lengths off the winner In The Congo in the Group 1 $1 million Golden Rose (1400m) in Sydney.

Prior to that she was narrow victor at big odds in the Group 2 Furious Stakes (1400m), her second win at that level having earlier taken out Randwick’s Group 2 Percy Sykes Stakes (1200m) for a big pay day during April.

She’s had two trials this summer leading-up to her return and, after s strong January 4th hit-out at the Gold Coast, looks ready to fire fresh at current odds of $5.50.

The danger following closely in Magic Millions 3YO Guineas betting this summer is the Peter & Paul Snowden-trained King Of Sparta ($6) drawn wider in gate 13 for jockey Nash Rawiller.

The stable took out last year’s race with Aim and get a chance at back-to-back wins saddling up this consistent son of I Am Invincible.

King Of Sparta is two from eleven coming into the race, but was third in last October’s Group 2 Roman Consul Stakes (1200m) so has form around some strong three-year-olds.

First-up he was slow away on a Soft (7) track before finishing under a length back third in the Listed Gosford Guineas (1200m).

Second-up he presents fitter for that run and with conditions to suit, a quicker getaway sees him present as a challenge here.

Drawn right out wide (21) for John O’Shea is the $7 third elect I Am Lethal chasing a fourth win from five starts and a third on the trot.

Jockey Hugh Bowman won this event back in 2011 aboard Torio’s Quest and is after a second here in the saddle of O’Shea’s progressive I Am Invincible colt whose last start produced a two and a half-length win over 1300m on New Year’s Day at Kensington.

Rounding out the single-figure fancies at $8 Magic Millions 3YO Guineas odds is the Chris Waller-trained Starman drawn a treat in gate seven for top Sydney-based hoop James McDonald.

A dual Magic Millions 3YO Guineas winning hoop following wins on Sweet Idea (2014) and Aim (2021), McDonald jumps back in the saddle of Starman here after Rawiller guided the son of Zoustar to his January 8th win here.

Starman won over 1200m in a three-year-old’s handicap carrying 59kg by over three lengths and should relish the 1400m coming back to 56kg on Saturday.

The Magic Millions 3YO Guineas is set to run as the Gold Coast Race 8 at 4:45pm (AEST).