Gai Waterhouse and Adrian Bott caused a boilover at Rosehill on Saturday as jockey Tim Clark and six-year-old American import Con Te Partiro put in a courageous performance to take out the Group 1 Coolmore Classic (1500m).

The pair got off to a quick start from the barriers before settling just off the speed in the early goings. In a tightly bunched field of 15, Clark moved into the lead coming off the final turn before comfortably racing away down the middle portion of the straight.

Rain wreaked havoc for most of the day with the track being downgraded to a heavy 9. Con Te Partiro had never raced on a heavy surface before, making the win even more incredible against a talented field of proven wet trackers. 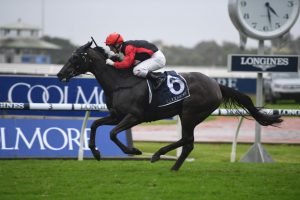 The win marked his 13th Group 1 victory, while it was also a milestone day for Gai Waterhouse – who tied champion trainer Max Lees with five Coolmore Classic wins.

“She can be a bit quirky at times, but we have just kept her in her routine and the team that has worked with her have done a fantastic job because she can be high maintenance at times.

Con Te Partiro was disappointing first-up last month when sixth in the Group 2 Guy Walker Stakes (1400m) at Randwick. He now holds a nomination in next months Doncaster Mile on April 4 back at Randwick, where he’s firmed from a whopping $101 into $51.

“She will go to the Queen Of The Turf which looks a lovely race for her.  She also has a nomination for the Doncaster so we have plenty of options with her and we will weigh them up after today.”

If the stable chooses to back up, they could also head to the Coolmore Legacy Stakes (1600m) a week later as a $26 chance after firming from $41 prior to Saturday’s race.

Complete markets for both races can be viewed here.