The European import was rolled as the short-priced favourite last time out in the Caulfield Stakes, snapping a five-race unbeaten streak that included a pair of Group 1 wins in the Doomben Cup during the winter, and the Underwood Stakes earlier in September.

Despite his performance last time out, Zaaki remained the short-priced favourite heading into the Ladbrokes Cox Plate a fortnight ago, only to be scratched the morning of due to an elevated temperature.

The seven-year-old has reportedly returned to full health ahead of his final assignment of the spring, and bookmakers wasted no time installing him as the $2.40 favourite in what is arguably one of the most competitive editions of the Mackinnon we’ve seen in years.

Eight of the 10 acceptances have won a Group 1 previously, but Neasham still thinks Zaaki is poised for a return to the winner’s circle following nearly a month off.

“He’s been doing his normal routine; we haven’t done anything different or changed anything. He had a temperature, but it was only a 24-hour thing,” Neasham told RSN’s Racing Pulse on Friday.

“I was keen to keep him in for the following week and see how he was, and he seemed to be thriving. Obviously, it’s not ideal coming off the back of a defeat at Caulfield, but I can’t really fault him, his work was good on Tuesday, he looks fantastic and feels well.” 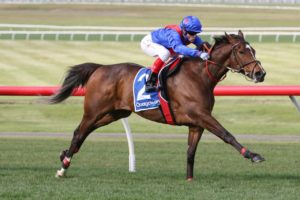 Zaaki is proven over 2000m, having won the Doomben Cup over the same journey by a whopping seven lengths back in May.

James McDonald was in the irons that day, and he finds himself back in the saddle on Saturday hoping to claim a slice of history.

After winning Tuesday’s Melbourne Cup aboard Verry Elleegant, J-Mac stands only one win away from the Melbourne Cup Carnival record of nine winners by a single jockey set by Brett Pebble in 1999 and 2000.

J-Mac has a strong book of rides this Saturday, but he did raise a query about Zaaki during the week saying the dual Group 1 winner was changing legs during a gallop.

Neasham was quick to put any concerns to rest, saying it was something he’s been doing throughout his racing career.

“He’s done it the whole time I’ve had him” Neasham said.

“James rode him once this prep in work in Sydney and he’s ridden him twice down here. It’ll obviously be good to have him on and give him a feel, but he’s always done it, I don’t know why.”

As far as tactics go, Neasham was happy to let McDonald’s class do the talking – but she does expect Zaaki to be handy with a more genuine tempo expected in comparison to the Caulfield Stakes.

“I’ll just leave it up to James, James will know the one thing I want him to do, which he’ll want to do naturally anyway, is let the horse be in a rhythm” Neasham went on to say.

“They were really rolling in the Doomben Cup and he loves riding like that. I expect he’ll be pretty handy.”

The four-time Group 1 winning trainer went on to say that last week’s Empire Rose Stakes winner Colette and the Chris Waller-trained Hungry Heart were the main dangers on Saturday, but that she also felt Zaaki’s stablemate Mo’unga was a big chance.

The Savabeel entire finished fourth in the Cox Plate two weeks ago and has seen plenty of support in the Ladbrokes market, firming from $9.00 into $8.00 at time of publish.

“I think this is going to suit him better than The Valley, I know there’s a bit of rain around on the day but I think he’ll be better on a firmer surface.”

The 2021 Mackinnon Stakes market, courtesy of Ladrokes.com.au, is available here.